Let’s take a brief look at what the witnesses heard, and how they heard it.

The John McAdams site breaks down the locations of shots according to different sources. It also provides a tabulation (by Joel Grant) of the number of shots that witnesses heard, showing that “81%” heard three shots. 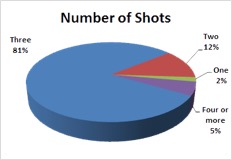 Pie chart by Joel Grant of the number of shots heard by witnesses, taken from the John McAdams website. [1]
This pie chart would seem to indicate pretty conclusively that there were only three shots heard in Dealey Plaza. However, it is misleading. It probably counts witnesses who heard “at least three” or “three or four” shots as having heard “three.” There is no category for “at least three” or “three or four” on the chart. Nor do we have the source for the witness accounts (Warren Commission testimony? Sheriff’s Department affidavits? Newspaper accounts?) to verify the information. 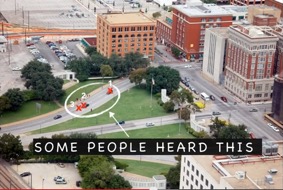 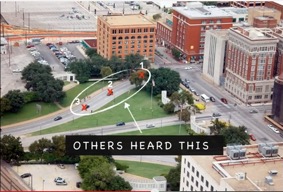 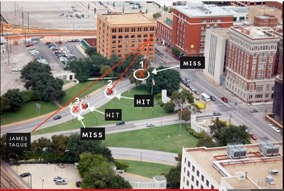 Some witnesses heard four shots, as this graphic indicates, “exactly what S.M. Holland heard.” [4]
By combining the two different three-shot witness accounts into a four-shot scenario, as the poster of the YouTube video notes, the result is exactly what witnesses like S.M. Holland and Austin Miller heard. This scenario also accounts for witnesses who heard “at least three” or “three-to-four” shots.

In fact, news reports from the day of the assassination  stated, “When the shots were first fired, there were thought to be three, but was later confirmed there were four shots.” [5] Note that these same reports also stated that a Secret Service agent was killed. It wasn’t a Secret Service agent who was killed, of course; it was Dallas Police officer JD Tippit, and I believe the confusion was caused by Hickey’s falling over “like he was shot, too” (per S.M. Holland’s statements) but the reported confirmation of four shots is certainly worth attention.

So what can account for th is wide discrepancy among earwitnesses?
Bear in mind that witnesses were not expecting an assassination. And many, when they heard the first shot or two, thought it was a “motorcycle backfire” or “firecracker.” As James “Ike” Altgens stated, “I mean the first shot, and being fireworks—who counts fireworks explosions? I wasn't keeping track of the number of pops that took place, but I could vouch for No. 1, and I can vouch for the last shot, but I cannot tell you how many shots were in between.” [6]

Additionally, the mis-perception of “echoes” could have caused many people to believe that a separate sound was simply an echo of an earlier sound rather than separate and distinct shots.

This is why the acoustic evidence, if valid—and there is reason to believe that it is valid—is so important. Even if one does not accept the results of the analysis that “proved” there was a “grassy knoll shot,” tests conducted in Dealey Plaza showed that the duration of actual echoes was only ¼ to ½ second in length.

There are arguments on both sides as to the validity of the acoustical evidence. But I’ll present a new one—the evidence of the dictabelt itself is valid, but other evidence has been misrepresented (i.e., the HSCA diagram of the microphone placement) to make it appear as if the dictabelt evidence is not valid.