In reading Sherry Fiester's book Enemy of the Truth: Myths, Forensics, and the Kennedy Assassination, I came across an interesting bit of information concerning the autopsy report EOP entry, about halfway through (loc 3669 of 7254 in the Kindle edition):

"The dimensions provided in the autopsy report indicate a wound measuring 6 millimeters by 15 millimeters; indicating a 24 angle of impact by the projectile for the fatal headshot. The trajectory angle based on those wounds would be calculated at five degrees downward and 18.6 degrees right, relative to Kennedy's head position in Zapruder Frame 312."


Fiester describes how a perfectly level angle of shot would create a round wound, while the eliptical shape of the wound indicates a downward angle. Fiester notes how the shape of the entrance wound does not match a TSBD trajectory. However, I'll bet it matches the trajectory back to the follow-up car and comes pretty close to Donahue's trajectory.


A critique on Fiester's work: Aside from some forgivable typographical errors (e.g., consistently mis-spelling Hickey's name to be more like "Hinckley," the guy who shot Reagan), Fiester seems to accept the authenticity of the Zapruder film. Therefore, she believes that witnesses were mistaken about the limousine stop, and that they misperceived the passage of time (i.e., that time seemed to "slow down" for these witnesses). She also thinks the "blood spray" apparent in the Zapruder film is authentic, and is "back spatter" for a shot from the triple overpass. But she also describes the difference between "forward spatter" (spray in the direction of the travel of the bullet) and "back spatter" (spray in the reverse direction of the bullet's travel) and notes that forward spatter typically has more blood and force. than back spatter. So if she thinks the spray is "back" spatter, then where in the film is the "forward" spatter? It does not appear, because the film is a fabrication, and the fact that the spray matches what she would expect for back spatter is just coincidence, an unintended result of trying to make the spray look like forward spatter. (In the recently released documentary A Coup in Camelot, available to rent or purchase on Amazon.com, she explains that forward spatter travels at the same speed as the bullet to explain why it doesn't appear in the film--but I don't buy it.) She also believes that the "throat grab" cannot be the result of "decorticate posture," because decorticate posture is not an instantaneous reaction. I assumed from this that she trusted the authenticity of the Zapruder film. However, I was recently able to get her contact information, and in a telephone conversation, she assured me that she did not actually trust the authenticity of the Z-film, so I'm not sure exactly why she thinks the "throat/chest grab" can't be decorticate posture. (Ms. Fiester has been very ill lately and has not yet had the chance to respond to all of my questions.) Decorticate posture, it should be noted, is indicative of severe brain trauma.

​I originally assumed Fiester's in-shoot was at the forehead site.  That assumption was based on this "fracture pattern" image presented in A Coup in Camelot while Fiester is talking about JFK's fracture pattern: 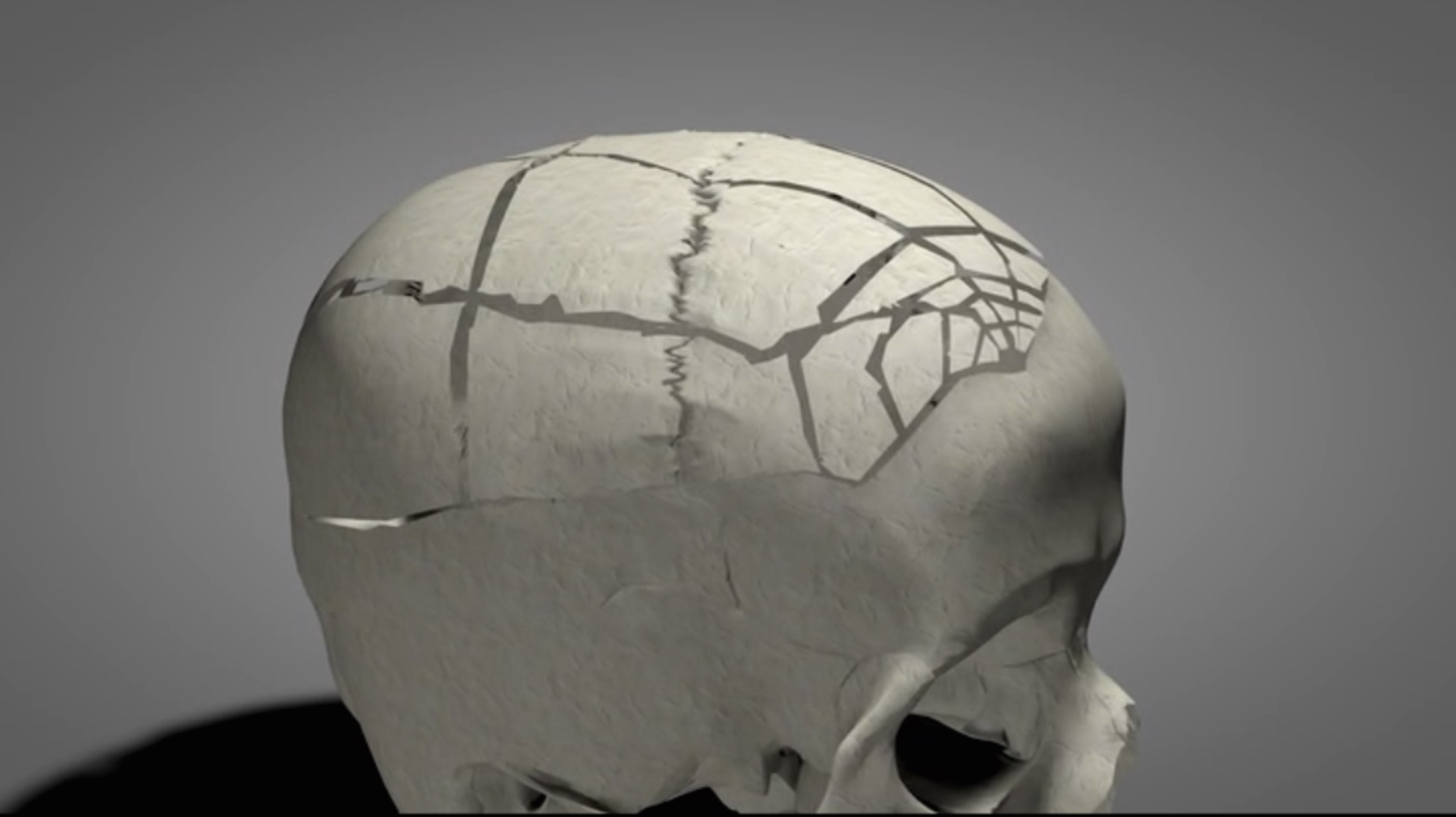 In our conversation, Ms. Fiester assured me that that image was someone else's interpretation of her fracture pattern discussion. Instead, she puts her in-shoot "a little forward of the stephanion," which is more on the side of the head/temple area, placing her in-shoot at about the same location as the HSCA Forensic Pathology Panel's out-shoot. (Again, I am waiting for her to confirm, but this seems to be the area that is "a little forward of the stephanion"): 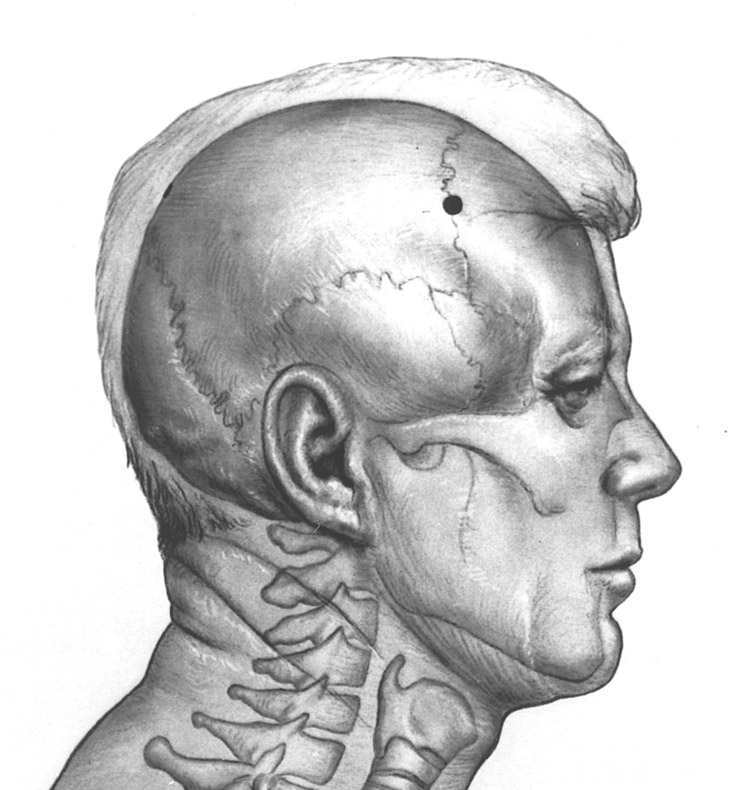 ​As I said, I am waiting for her response to my questions, but I do like Chesser's forehead entry better (with the minute particles on the lateral X-ray "highly suggestive of an entry"), since it matches the Kilduff/Crenshaw head points.

Despite the trajectory issues, the 3D image of Kennedy's position (presumably frame 312 immediately before the Z313 head shot) in A Coup in Camelot is useful for other reasons. We can see that Kennedy is leaning forward as well as to the left. An in-shoot at the forehead site at this point is inconsistent with any reasonable sniper location. For a shot to have entered the forehead site and exited at the back-of-the-head blow-out area, it would have to have come from a lower  location, creating a near horizontal and slightly upward trajectory (which may be why Fiester likes the "forward of the stephanion" entry). 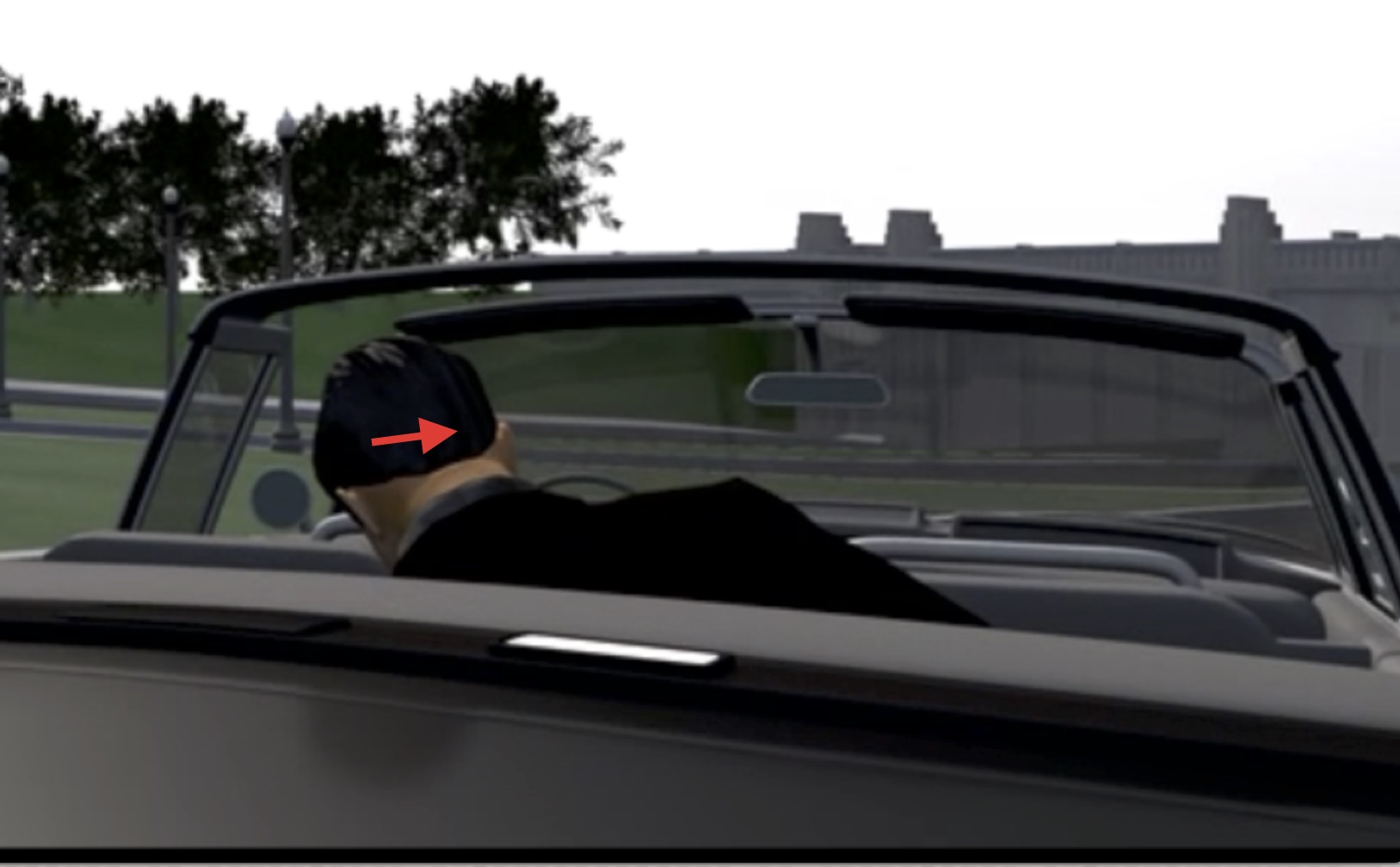 We can see this same slightly upward trajectory from the forehead to the back of the head blow-out area in Z-312 (the frame right before the Z-313 head shot (I've elsewhere noted the transparency of Jackie's hat as an indication of alteration):

Fiester's "a little forward of the stephanion" might have the same problem of matching with the Zapruder film. Considering evidence of Zapruder film alteration/fabrication, as well as evidence of alteration in the medical evidence (Mantik's "white patch," Chesser's "burn mark," etc.), it may be unwise to assume that anything about the medical evidence is authentic. Which is why I like the Kilduff/Crenshaw/Knudsen head points, which are consistent with a "shrapnel" wound location noted by mortician Tom Robinson.

Otherwise, I like Fiester's work. In Enemy of the Truth, she does a good job explaining the failure of the DPD to follow their own investigative protocols, explains how the DPD mis-handled evidence, and goes into other weaknesses of the Warren Commission conclusions that I agree with. In addition, it was in Fiester's work that I first came across the term "decorticate posture"--even if she doesn't believe that's what the throat/chest grab actually was.
Next: New thoughts on the moorman photo