The Bronson Film
This film was an amateur 8mm film shot by spectator Charles Bronson, who was some distance away from the President (across the plaza) at the time of the fatal headshot. The picture is distant and blurry. An exhaustive search of the Internet found only two sites with a single image of the film that purportedly shows that “Hickey did not do it”: http://jfkfiles.blogspot.com/2013/08/drums-of-conspiracy.html and http://www.patspeer.com/the-smoking-gun-that-lied .

Take a good look at this image, taken from the "Drums of Conspiracy" website: 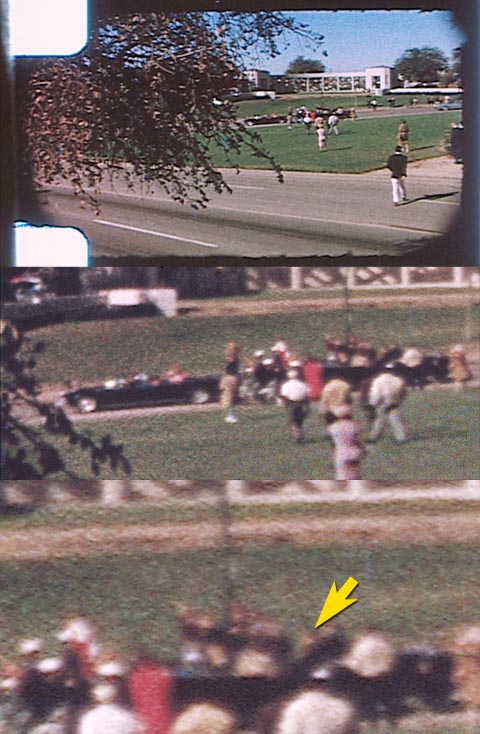 Looking at this image critically, one should ask oneself several questions: 1) Is it really Agent Hickey that the arrow indicates? 2) Is this image really taken at the exact moment of the head shot? And 3) What is that weird black line (right at the tip of the arrow), anyway?

To answer the first two questions, more than just this one frame is needed. We need to account for all the agents and the two Kennedy friends of the follow-up car and match the all the frames, image-for-image, to the benchmark Zapruder film to be certain of the exact moment of the head shot. However, only this blurry single image is available online.

To say for certain that the blurry head indicated by the arrow belongs to Hickey is ludicrous. There should be seven agents, plus two Kennedy aides in the follow-up car. (The eighth Secret Service Agent, Clint Hill, is presumably blocked from view at this point by the motorcycles as he is running towards the back of the presidential limousine.) We can see one agent dressed in black and standing on the running board, who can be identified as Agent William McIntyre, who was stationed behind Clint Hill on the left rear running board. In the rear of the car, we would expect to see not only Agent George Hickey in the left rear seat, but also Agent Glen Bennett (another agent new to the follow-up car) in the right rear seat, and Agent Paul Landis on the right (rear) running board. This single image is too blurry to tell who’s who. Seeing additional frames close-up may help to more conclusively prove who’s who, or, if those frames are as blurry as this one, might not.


His reasoning is as follows:


1 -  First look at  Zapruder film frame #312. You are the camera lens. To the left is Jean Hill (red coat) and Mary Moorman.  In the center is the President. The Presidential limousine has a speed of 11 miles per hour or 16 ft. per second 'The woman in a long coat', on the grass of Dealey Plaza, is running toward the President.  The woman's head is in an alignment with the President's head, relative to Zapruder's camera view.

Confirmation of Distance traveled relative to Time, at a Rate of speed ( 11 mph or 16 ft/sec ):

However, the most interesting aspect of this Bronson film image is the appearance of the black line just at the tip of the arrow.

This black line (called a "black stick" by Bonar Menninger, author of Mortal Error) looks like it could very well be the AR-15 rifle. 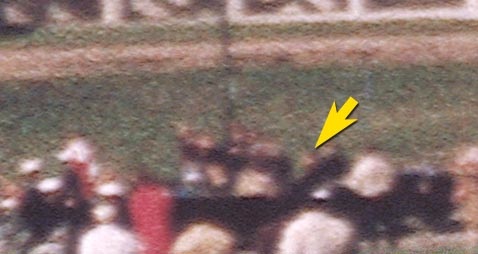 If that black line is the AR-15 rifle, as is likely, then it is not being held by the person indicated as “Hickey” by the arrow. The angle would be extremely odd—behind the head and at a forward diagonal, and closer to the camera than the person whose head is indicated by the arrow. The person indicated by the arrow is most likely Agent Glen Bennett, who was seated in the right rear of the follow-up car, and Hickey is blocked from view by Agent McIntyre on the running board. Bennett, who was one of the agents that had been out at a bar the night before the assassination, stated that he “reached for the AR-15 located on the floor of the rear seat (but) Agent Hickey had already picked up the AR-15.”  Or he could be leaning forward to help SA Paul Landis retrieve his sunglasses which he had dropped, which Bennett also indicated he did.

Given that Hickey can be seen in the Altgens photograph standing in the follow-up car looking backwards towards the Texas School Book Depository just prior to the head shot (see crop of Altgens photo below, with Hickey indicated by the red arrow), it is extremely unlikely that he would simply "sit back down" right before the head shot. 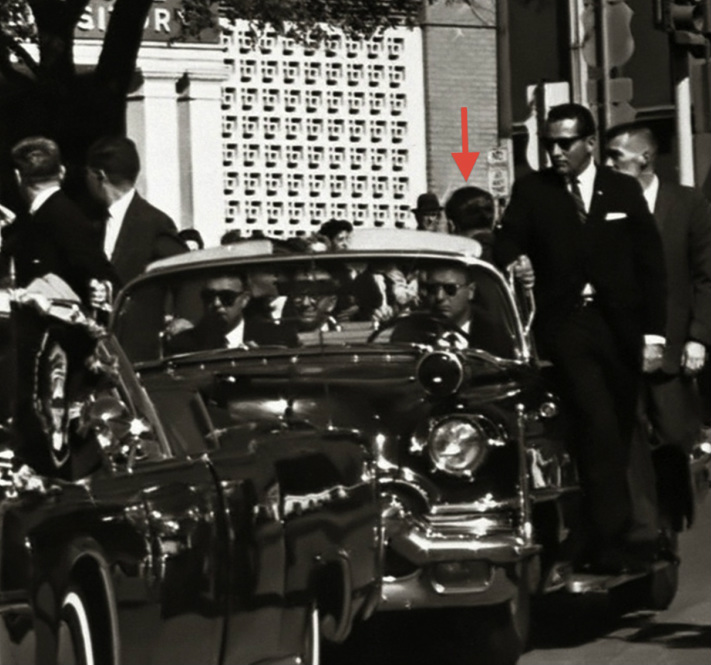 The person indicated by the arrow in the Bronson film frame is SA Glen Bennett, who was seated next to Hickey on the passenger side of the rear seat. The AR-15 is at the tip of the arrow, Bennett's head is just visible under the AR-15, and Hickey is hidden from view by SA William McIntyre on the running board.

There may even be “smoke” around the follow-up car in the Bronson film image, a fuzzy streak of light brown trailing behind the arrow, but the image is too blurry to say with any degree of certainty whether this brown “trail” is actually smoke or dry grass. Again, close-ups of frames before and after this one might help to clear up the streak of brown visible against the green grass above the follow-up car..

Most importantly, as evidence that Hickey did not accidentally fire the fatal head shot, the Bronson film image is far from conclusive. It does not show Hickey seated at the moment of the assassination. On the other hand, what this evidence does do is strongly suggest that the rifle actually was in Hickey’s hands at or very close to the moment of the fatal head shot.